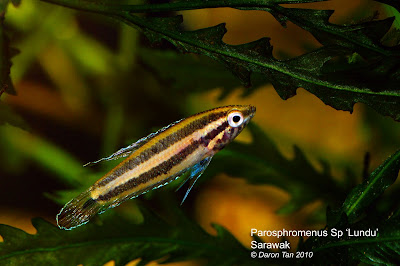 The raining season have kept us in Borneo in house much the last couple of months and until recently we are seeing some small breaks from daily thunderstorms. This week I managed to get some specimens of a unidentified Parosphromenus from Western Sarawak. Originally collected some years ago by regional fish enthusiasts, it was initially mistaken for Parosphromenus Allani, later clarified as a separate species. The fish in photo is still acclimatizing to new home and the colors are extremely beautiful in the wild. I will retake the photo in time. in the meantime I have several other photos of interesting fishes which I will share over the next few days.

Thanks for dropping by again and have a great weekend!
Posted by Daron Tan at 6:40 PM

Daron Tan
Been exloring streams and keeping aquarium since 7 years old. Started BES in 2004 with a few friends, enjoying the support of enthusiasts worldwide.